Happy Birthday to our friends and customers born in January! Whether you have a new family member in 2021 or are celebrating someone's 80th birthday, a meaningful piece of jewellery with their birthstone is a wonderful way to celebrate. January's birthstone is the stunning Garnet. It is found in a rainbow of colours from the fiery orange of Mandarin Garnet, to the rich green of Tsavorite Garnet, to the most widely recognized colour of Pyrope Garnet. The Garnet birthstone is a great gift to symbolize friendship and trust.

The History of Garnet:

The name “garnet” originates from the medieval Latin word granatus, meaning “pomegranate,” in reference to the red color. The word Pyrope (used for the most popular garnet colour) comes from the Greek pyrōpos, which means “fiery-eyed”. Garnets can be found in history since the Bronze Age used as precious gems or tools. The pharaohs of ancient Egypt wore necklaces adorned with red garnets. In ancient Rome, signet rings featured garnets that were used to stamp the wax that secured important documents.

One of the most famous pieces of garnet jewellery is the Smithsonian’s antique pyrope hair comb. A large rose-cut garnet sits at the crest and Pyrope Garnets mined from the historic mines in Bohemia (now part of the Czech Republic) decorate this stunning comb. These rich red garnets were extremely popular during the Victorian era (1837–1901), when the Smithsonian's hair comb was fashioned. 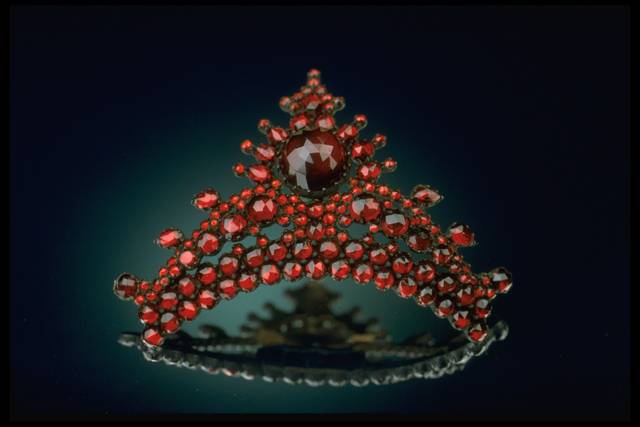 The Garnet said to bring love, luck, health, loyalty and friendship to people who wear it. Garnets are traditionally gifted to married couples on their 2nd and 18th wedding anniversaries.

According to Indian astrology, garnet helps eliminate negative feelings (depression, guilt). Garnets also are used to instill greater self-confidence and mental clarity to promote creative thinking and peace of mind. In ancient and medieval times, Garnet was thought to be a remedy for inflammatory diseases and soothing for an angry heart.

Where Garnets are Found:

Bohemia was the primary source of the red Pyrope Garnets (one of the most popular gems during Victorian times). In 19th century Russia, Green Demantoid Garnets from the Ural Mountains were prized by the Russian royal family and used by the great jeweller Peter Carl Fabergé (1846–1920). Today, the continent of Africa supplies most of the world’s garnets. The birthstone for January is also found in Myanmar, Brazil, Iran, Afghanistan, Pakistan, India and Sri Lanka, among other countries.