Happy Birthday March babies! Your March birthstone is the stunning Aquamarine, a blue birthstone that evokes the colours of the sea. Sailors throughout time have used this stone to keep the seas calm and their journey's safe. This stone is also thought to bring happiness in marriage. From deep green-blue to light, slightly greenish blue hues, faceted aquamarines are often free of inclusions and as clear as water, a symbol of purity.

The History of Aquamarine:

Aquamarine's name comes from the Latin word for "seawater" and was a stone highly regarded for safe sea travel. Early sailors believed that aquamarine talismans, etched with the likeness of the sea god Neptune, protected them against ocean dangers and drowning. According to legend, ancient sailors believed that mermaids’ tails were made of aquamarine.  The gem was nicknamed the “Treasure of Mermaids."

Aquamarine is not only the birthstone for March, but the gem has historicly also been given as a present on one's 19th wedding anniversary.

There are many famous Aquamarines, including the one given to the First Lady Eleanor Roosevelt  in 1936 from the government of Brazil; the stone was a dark blue rectangular step cut aquamarine that weighed 1,298 carats (ct). It was the larger of two stones faceted from a piece of aquamarine rough that itself weighed an impressive 2.9 pounds (1.3 kilograms). It is now housed at the Franklin D. Roosevelt Presidential Library and Museum in Hyde Park, New York.

Aquamarine is thought to exude a calming, soothing influence; the stone helps the wearer stay more cool and level-headed during stressful situations. Many cultures believe that aquamarine has a relaxing influence on land, particularly on married couples. It could reawaken love. It has also been a symbol of everlasting youth.

In Roman times, aquamarine was used to alleviate digestion, reduction of body fluid retention, and stomach diseases; all one had to do was drink the water in which the gem had been soaking. The Romans also used aquamarine to heal the heart, thymus, lymph nodes, throat, and immune system.

Where Does Aquamarine Come From:

Aquamarines are primarily found in hard rock and secondary in weathered pegmatite deposits. The Brazilian state of Minas Gerais has been an important source of aquamarine for the past two centuries. Aquamarine birthstones are also mined in Kenya, Madagascar, Nigeria, Zambia and Mozambique. They are also sourced in the United States in Colorado (aquamarine is their state gem) and California. 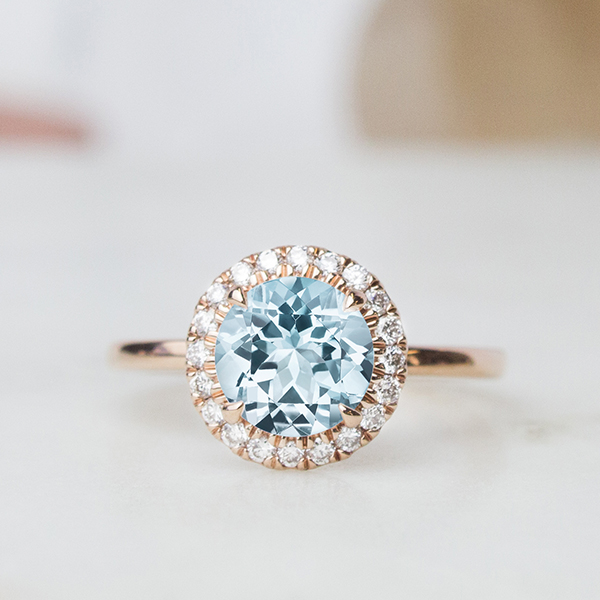